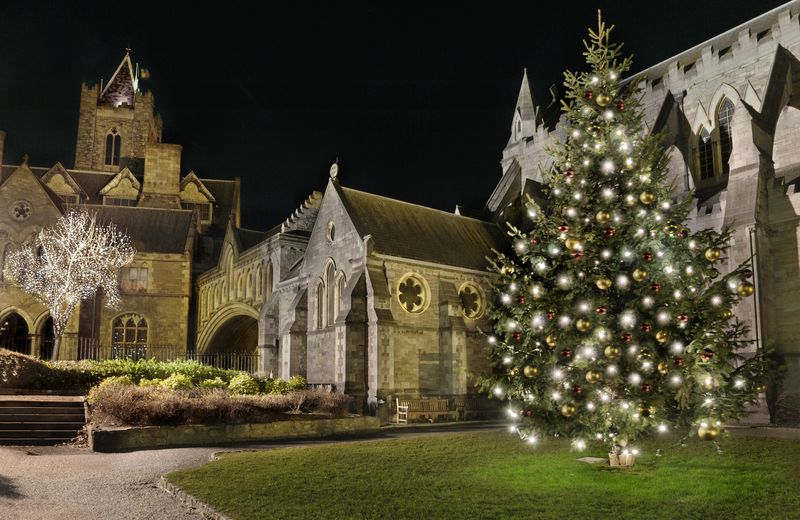 Shanakee adventures recently had the uplifting experience of attending a concert in Dublin’s Christ Church Cathedral. I brought a small-group of Scandinavian visitors to Dublin on a unique tailor-made Irish experience through the city’s Medieval and Viking past.

The venue was Christ Church Cathedral the oldest building in Dublin. The concert performed by the Adolf Frederik’s choir from Sweden is sponsored annually by IKEA and attended by the Swedish Ambassador to Ireland amongst other dignitaries. The event arranged by Dublin’s Swedish and Scandinavian communities, celebrates Santa Lucia the light bearer. Scandinavian ties in the one time Viking capital of Dublin go back over a thousand years and so this unique experience opens a window on to a fascinating story.

Outside the imposing walls of the Cathedral, the December evening in Ireland’s capital city was dry and frosty, a light breeze drove the chill air. Night had drawn in and the line along Christ Church’s railing lengthened. The smell of roasting malt barley infused the frosty westerly breeze.  The aroma, carried from the mighty Guinness Storehouse only a few blocks upwind of us west along the river liffey is the essence of Dublin city centre and has been for over two hundred and fifty years.

While waiting in line my Scandinavian guests ask me about Christ Church and the Cathedral’s history.

“You needn’t go on, I think we understand” they reply

The turning of the first millennium brought us the story of Christmas as we know it today.

A lot has happened in the intervening years most of it lost to the mists of time but the folklore and stories that surround Christmas are powerful and resonate through the ages.

795 a.d. is a date we all learn as children at school, the first of the Pagan North men landed on our shores. Viking raiders aboard sleek hulled long-ships burned the Christian monastery on Rathlin island off the Giant’s Causeway coast in County Antrim.

Sea raiders from the fjords of Norway and the low countries of Denmark, we the Irish would mark them apart in our language as the Finn Gall or fair foreigner from Norway and the Dubh Gall or dark foreigner from Denmark. They would from that first raid spend the next two hundred years gouging lumps out of Ireland from bases in her river valleys. These bases would eventually become our major ports and cities, places like Vaderfjord (Weather fjord became Waterford)  Inis Gall dubh (meaning Island of the Danes would become Limerick) and Corcagh (Meaning swamp, would become Cork city, well… you can’t have everything).

By the turn of the first millenium a.d. Dublin was a thriving port and a Viking capital to rival other cities like Yarvik (York) in England. The Finn Gall and the Dubh Gall by this stage had inter-married, forging necessary political alliances among powerful native clans. The children of these alliances were called the Gall Gael or the foreign Irish and the most famous of them was the son of the Norse king of York and Dublin and an Irish queen by the name of Gormflaith Ní Murchadh. Described in the icelandic sagas as the most beautiful of women, her son Sigtrygg Silkeskegg or Sitric Silkenbeard would be equally as beautiful. He was in fact(or as far as anyone can figure out in any case) grandson to Ivar the Boneless the son of Ragnar Lothbrok, a character made popular by the HBO series Vikings. Sitric would himself father a long line of underwear models to star in HBO series’ for years to come Sitric was said to be the man who laid the foundation stone at Christ Church Cathedral on the high ground overlooking the Viking settlement at what is now wood quay in the year 1028 a.d. The Viking era had a profound and indelible influence on the course not just of Irish history but the history of Continental Europe, from the western steppes of Asia to the Atlantic rim to Sicily in the Mediterranean. Syracuse was attacked and Sicily conquered in 860 by Sitric’s grand uncle Björn Ironside (pictured right)

Along with international commerce, coinage and intensified trade the Vikings brought with them to Ireland their  language, ideas and probably their most enduring legacy, their sagas and storytelling.

It wasn’t until well into the 12th Century that the last of the Pagan Viking kings would be baptized well over nine hundred years after the first Christian missions to Ireland, and so for almost 30 generations two distinct cultural traditions lived side by side. The period of twelve days spanning the darkest days of midwinter was known to the old Norse as Jol or Jul (Christmas is still referred to as Jul pronounced Yule in the Scandinavian countries). This was the time when Odin, Father of the Gods or the JolFadr (Yule father: a guy with a long white beard flying through the sky basically) Father Christmas would lead the Gods on a hunt through the winter sky. Yule tide would eventually become Christmas tide as the two traditions were reconciled over time.

For Shanakee and for many Scandinavians one of the most beautiful and enduring of the Vikings folk traditions is the marking of the long days and the long nights. The folk tradition of seasonal celebration is quite different here in Ireland where we enjoy mild southern latitudes when compared to the extremes of Scandinavia’s northern aspect, extending as it does all the way to the polar circle in the north. In Ireland with a farming tradition dating back over five thousand years and with milder winters and a longer growing season, we mark what are known as the cross quarter days (early spring and late Autumn) with festivals celebrating the sowing and the reaping.

In the far north of the world

In the far north celebrations mark the extremeties of the year, Midsummer marking summer’s height and Midwinter’s celebrations marking the longest night are observed. One of these old Viking folk traditions is Lussinatt or Lussifärd also known as Long Night which fell on the 13th of December under the old calendar system. The Lussi were seen as demons of the night. Some scholars believe that the name Lucifer derives from Lussifärd which translates as the Lussi’s passing over. It was thought far too dangerous to venture out on this the darkest of nights and so children and adults alike would stay indoors while the Lussi, trolls and dark elves emerged from the night and howled through the night sky above their homesteads. Fires would be lit in the hearth to deter the Lussi from descending through the smoke hole to snatch children and carry them off. With the Viking conversion to Christianity and the intermarriage of ideas across the Viking world the story of the Lussi was destined to meet with that of Saint Lucy or Santa Lucia. When eventually they met one would inevitably become shadow to the other or  to paraphrase Leonard Cohen through a crack shone the light.

Saint Lucy was an early Christian martyr from the city of Syracuse in Sicily. Her story was already over four centuries old by the time Björn Ironside landed there with his fleet of longships in the 9th Century. Known as the light bearer Lucy brought light to terrified Christians hiding in darkness in the cities catacombs, Christians who were persecuted mercilessly under the Emperor Diocletian. Into the dark underworld Lucy carried food and water to the persecuted with a crown of light that she might free her hands to carry more food.

The entering of light into the underworld thus bringing life back to the earth and mankind after the longest night, is probably one of the most common and well attested of our earliest beliefs. It is the story that tells itself with every sunrise, with the ebbing of every tide and the passing of every winter.

The undying story of Christmas

Wishing you all a light filled and joyous festive season telling stories around the dinner table shared with friends and family.

Merry Christmas and Happy New Year to you all

Samuel
Founded by Samuel Thomas Brett, a third generation storyteller and native of Ireland's remote and wild northwest, we run tours across the length and breadth of Ireland throughout the year.
Previous postOn sea pilgrimage with saints
Next postThe History of Star Wars in Ireland